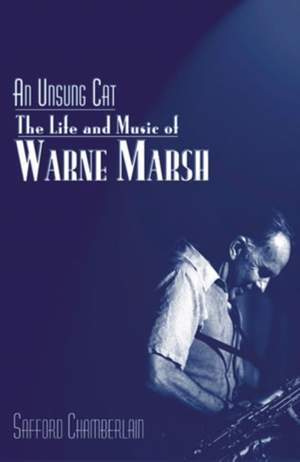 An Unsung Cat: The Life and Music of Warne Marsh

remarkable job of cutting through the myth of Warne Marsh and taking a serious, analytical look at his life and his music...Chamberlain's book is one of the finest examples of jazz biography,... — AllMusic More…

An Unsung Cat explores the life and music of jazz saxophonist, Warne Marsh. Safford Chamberlain follows the artist from his start in youth bands like the Hollywood Canteen Kids and The Teen-Agers through his studies under Lennie Tristano, his brilliant playing of the 1950s, his disappearance from public view in the 1960s, his re-emergence in the 1970s, and his belated recognition in the 1980s as one of the finest tenor players of the post-World War II era. Through interviews with the Marsh family and friends, Chamberlain offers an inside view of Marsh's private life, including his struggles with drug abuse. Detailed analysis of outstanding performances complements the personal story, while an extensively researched discography and photographs reveal the public and private face of this unique performer. In addition to the book, Scarecrow is pleased to offer a companion compact disc, released by Storyville Records. The tracks on the CD provide a representative sampling of Marsh's best work, while providing a historical overview of his development, from the beginning track, 'Apple Honey,' which is a private, low-fidelity tape from an NBC radio broadcast in 1945 of the Hoagy Carmichael Show, to the final track, 'Sweet and Lovely,' captured months before his death in 1987.

remarkable job of cutting through the myth of Warne Marsh and taking a serious, analytical look at his life and his music...Chamberlain's book is one of the finest examples of jazz biography, and worthy of Marsh's legacy in every way