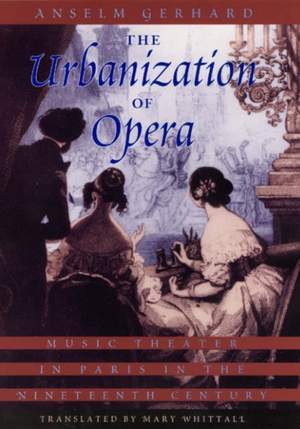 The Urbanization of Opera: Music Theater in Paris in the Nineteenth Century

Why do so many operas end in suicide, murder, and death? Why do many characters in large-scale operas exhibit neurotic behaviours worthy of psychoanalysis? Why are the legendary "grands operas" so seldom performed today? Anselm Gerhard argues in this text that such questions can only be answered by recognizing that daily life in rapidly urbanized mid-19th-century Paris introduced not just new social forces, but also new modes of perception and expectations of art. He attempts to provide a realistic portrayal of life in a metropolic, librettists and composers of "grand opera" developed new forms and conventions, as well as new staging performance practices. For example, the "tableau", in which the chorus typically plays the role of a destructive mob. These larger urban and social concerns are brought to bear in Gerhard's discussions of eight operas, composed by Rossini, Auber, Meyebeer, Verdi, and Louise Bertin.