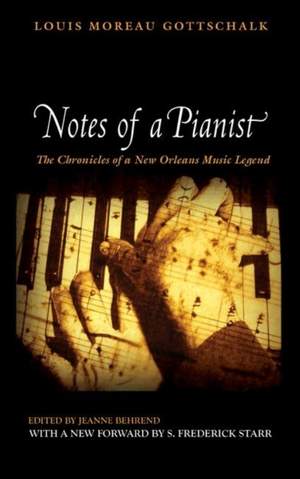 Notes of a Pianist

Notes of a Pianist chronicles the life of one of the most remarkable musical minds of the American experience, the great nineteenth-century New Orleans-born composer and pianist Louis Moreau Gottschalk (1829-1869). An important cultural and historical work, the book recounts Gottschalk's experiences as he traveled and performed throughout the last decade of his life. Born to an English-Jewish father and a Haitian mother, Gottschalk is remembered as one of the great New Orleans musicians and composers, his music a combination of the classical tradition in which he was trained, and the New Orleans tradition into which he was born. His art form took him far outside the boundaries of Louisiana, however. While still a child, he studied piano in Paris and gave a concert at the Salle Pleyel, after which Frederic Chopin is said to have remarked: "Give me your hand, my child; I predict that you will become the king of pianists." Gottschalk returned to the United States in 1853, and later lived in Cuba, Puerto Rico, Panama, and South America, during which time he kept-sometimes sporadically, sometimes daily--the notebooks that formed the basis of Notes of a Pianist. Published for the first time in 1881, the book continues to resonate with American cultural and musical life. Notes of a Pianist demonstrates Gottschalk's importance not only as a reporter of the musical life and tastes of Americans during the Civil War, but also as a forefather of Louisiana's rich musical culture.