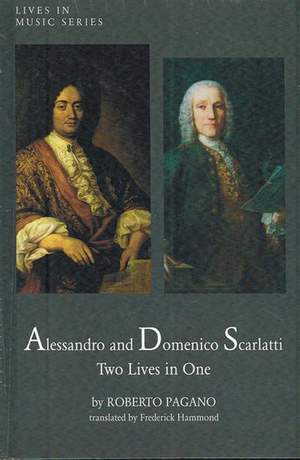 Alessandro and Domenico Scarlatti - Two Lives in One

Alessandro Scarlatti is one of the most celebrated and least performed composers of the Baroque, and his son Domenico remains one of the most enigmatic figures of the period. Roberto Pagano's Two Lives examines the relationship between father and son, interpreted in the context of seventeenth-century Sicilian culture. This study in historical anthropology is filled with new documentation on the lives and careers of the two men, but the boundaries between documented and informed speculation are clearly marked. At the heart of the relation between the two Scarlattis lies Domenico's famous legal emancipation from his father, which has generally been viewed as a bold actof personal and artistic defiance. Pagano reveals, through a corrected text and translation of the crabbed Latin notarial document, that it was actually a renunciation of the ancient Roman patria potestas, a father's powerof life and death over his children. ROBERTO PAGANO is a leading authority on the lives and music of the Scarlattis and the author of their entries in the New Grove. He has written widely on Sicilian musical life and has served as Artistic Director of the Sicilian National Orchestra and the Teatro Massimo in Palermo. Translator Frederick Hammond is both performer and scholar. His scholarly works include Girolomo Frescobaldi (1984) and Music Spectacle in Baroque Rome(1994). He holds the Irma Brandeis Chair of Romance Studies at Bard College.