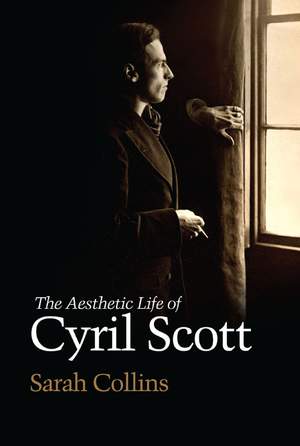 The Aesthetic Life of Cyril Scott

Prolific and personable, innovative and contentious, Cyril Scott (1879 - 1970) was considered to be one of the most promising young talents in modern British music at the turn of the twentieth century. He was a member of the 'Frankfurt Group' (together with Percy Grainger, Norman O'Neill, Roger Quilter and Balfour Gardiner), his music was performed by some of the leading conductors of the time in Britain and on the Continent, and his friends included highly influential figures in European literature, art and politics. Apart from his music, Scott was the author of many books on alternative medicine, psychology, Occultism, Theosophy and comparative religion. He also wrote fiction, autobiography, and poetry. Scott embodied a unique time in a particularly unique way. His aesthetic ideas informed both his professional creative practice and his manner of living. He was not merely a composer, but an artist in thebroadest possible sense of the term.  This book provides the first comprehensive account of Scott's life and influences as well as an outline and contextualization of his aesthetic thinking. It traces his changing conceptionof the function of art and the role of the artist from his formative exposure to Symbolism through his friendship with the German poet Stefan George, to his exploration of Western and Eastern esoteric traditions, showing how the prevailing cross-pollination of ideas allowed him to develop a fully integrated rationale for his art and life. The story of Scott's development guides the reader through some of the most fascinating intellectual discourses of late-nineteenth and early-twentieth-century Europe.  Sarah Collins' current research focuses on British music aesthetics and criticism in the late-nineteenth and early-twentieth centuries. She has a particular interest in the interaction between turn-of-the-century conceptions of the function of criticism, theories of critical intuition and questions of moral philosophy. She lectured at the University of Queensland from 2006 and joined the faculty ofMonash University in 2012.