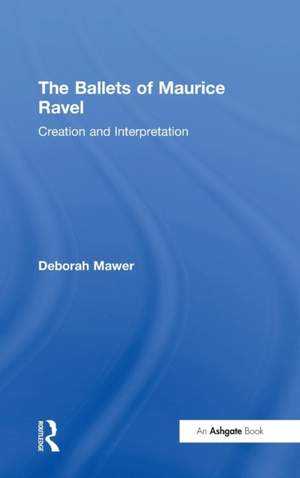 The Ballets of Maurice Ravel: Creation and Interpretation

This solid, well-organized volume offers a balanced discussion of dance and music in the ballets of Ravel...Recommended — Choice More…

Maurice Ravel, as composer and scenario writer, collaborated with some of the greatest ballet directors, choreographers, designers and dancers of his time, including Diaghilev, Ida Rubinstein, Benois and Nijinsky. In this book, the first study dedicated to Ravel's ballets, Deborah Mawer explores these relationships and argues that ballet music should not be regarded in isolation from its associated arts. Indeed, Ravel's views on ballet and other stage works privilege a synthesized aesthetic. The first chapter establishes a historical and critical context for Ravel's scores, engaging en route with multimedia theory. Six main ballets from Daphnis et Chloe through to Bolero are considered holistically alongside themes such as childhood fantasy, waltzing and neoclassicism. Each work is examined in terms of its evolution, premiere, critical reception and reinterpretation through to the present; new findings result from primary-source research, undertaken especially in Paris. The final chapter discusses the reasons for Ravel's collaborations and the strengths and weaknesses of his interpersonal relations. Mawer emphasizes the importance of the performative dimension in realizing Ravel's achievement, and proposes that the composer's large-scale oeuvre can, in a sense, be viewed as a balletic undertaking. In so doing, this book adds significantly to current research interest in artistic production and interplay in early twentieth-century Paris.

This solid, well-organized volume offers a balanced discussion of dance and music in the ballets of Ravel...Recommended

[Deborah Mawer's] study abounds in musical examples which will be of interest to the musicologist as well as the ballet historian.' Ballet