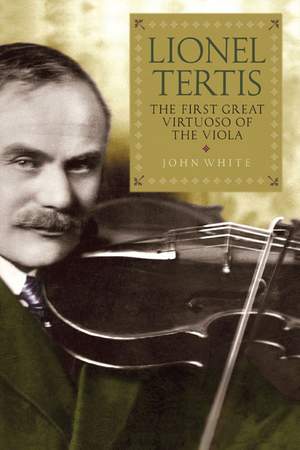 Lionel Tertis: The First Great Virtuoso of the Viola

One could hardly ask for a more authoritative voice for the definitive account of the life of the great viola virtuoso. [...] White's biography is the last word on Tertis and no less than its... — Gramophone Magazine More…

Lionel Tertis [1876-1975] stands in the company of Ysaÿe, Kreisler, Casals, Thibaud and Rubinstein as one of the greatest instrumentalists - and arguably the greatest viola player - of all time. Many composers, including Bax, Holst and Vaughan Williams, wrote significant works for him; he was a member of a number of prominent string quartets; and he was later to design and promote his own 'Tertis model' viola. Tertis is virtually synonymous with the increasing importance of the viola as a solo and recital instrument alongside the violin and the cello. This updated paperback edition tells how he rose from humble beginnings to become 'the father of the modern viola'. It exploresin detail his long and distinguished career, persuading composers to write works for the viola, arranging existing works for the instrument, editing and performing, and teaching and coaching, notably at the Royal Academy of Music.  JOHN WHITE is a prominent viola teacher and performer. He was a founder member of the Alberni String Quartet and later played with the London Philharmonic Orchestra and the Stadler Trio and collaborated with composersAlan Bush, Lennox Berkeley and Alan Richardson in performances of their works. White was Professor of Viola at the Royal Academy of Music for over thirty years and has chaired four international viola congresses in the UK since 1978. In recognition of his outstanding contributions to the viola, he was awarded the Silver Alto Clef for 2010 by the International Viola Society.

One could hardly ask for a more authoritative voice for the definitive account of the life of the great viola virtuoso. [...] White's biography is the last word on Tertis and no less than its iconic subject merits