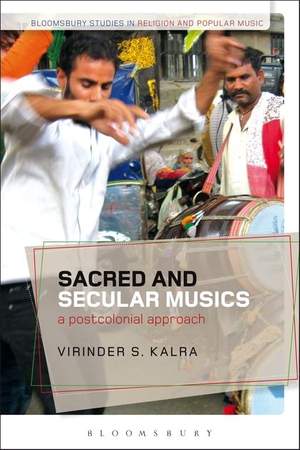 Kalra breaks new grounds in both religious and musicological studies. He critically engages with a wide range of colonial scholarship in diverse disciplines to call attention to its limitations... — Popular Music More…

How does the sacred/secular opposition explain itself in the context of musical production? This volume traces this binary as it frames Western Classical music and Indian Classical music in the 18th and 19th centuries, laying the ground for a contemporary exploration of what is ostensibly sacred music in South Asia. Offering a potent critique of musicological knowledge-making, Virinder S. Kalra explores examples of South Asian musics in various domains and traverses a new cartography of music in which the sacred and the secular overlap. Drawing on examples which include Qawwali, kirtan and popular devotional genres, Sacred and Secular Musics offers new empirical material, as well as new insights into conceptualising religion and music, and the ways in which music performs sacredness and secularity across the contested India-Pakistan border in the region of Punjab. Through its deconstruction of the sacred/secular opposition, Sacred and Secular Musics explores the relationship of religion and music to wider questions of religion and politics. Its postcolonial approach brings Asia into the Western sacred/secular opposition, and provides a set of analytical tools - a language and range of theories - to allow further exploration of non-western religious music.

Kalra breaks new grounds in both religious and musicological studies. He critically engages with a wide range of colonial scholarship in diverse disciplines to call attention to its limitations in understanding Punjabi musics ... More than its postcolonial approach, Kalra's study is remarkable for the insight that it provides into the demotic practices of Punjabi musicians through the range and depth of the interviews, which include practically every genre and musician on both sides of Punjab