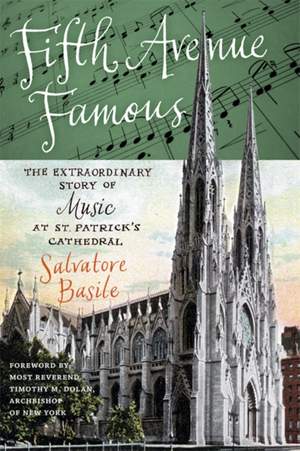 Fifth Avenue Famous: The Extraordinary Story of Music at St. Patrick's Cathedral (May, $29.95) by Salvatore Basile examines the 125-year history of its choir — Publishers Weekly

Victorian-era divas who were better paid than some corporate chairmen, the boy soprano who grew up to give Bing Crosby a run for his money, music directors who were literally killed by the job-the plot of a Broadway show or a dime-store novel? No, the unique and colorful history of St. Patrick's Cathedral.
Since its inception more than 125 years ago, the Cathedral Choir has been considered the gold standard of liturgical music-an example of artistic excellence that has garnered worldwide renown. Yet behind this stately facade lies an intriguing mix of New York history, star secrets, and high-level office politics that has made the choir not only a source of prime musical entertainment but also fodder for tabloids and periodicals across the nation. In this unique and engaging book, readers are treated to a treasure trove of vibrant characters, from opera stars from around the world to the thousands of volunteer singers who brought their own hopes and dreams-and widely varying musical abilities-to the fabled choir.
As the city's preeminent Catholic institution, St. Patrick's Cathedral has served one of the most dynamic and diverse communities in the world for well over a century. It has been intimately entwined with the history of New York: a major center of culture in the nation's cultural capital. The Cathedral Choir provides an extraordinary and largely overlooked insight into this history, and in Salvatore Basile's pitch-perfect
exploration it becomes a microcosm for the larger trends, upheavals, and events that have made up the history of the city, the nation, and even the world.
Basile also illuminates the choir's important role in New Yorkers' responses to some of the most momentous events of the past one hundred years, from world wars to world's fairs, from the sinking of the Titanic to 9/11, as well as its central role in the rituals and celebrations that have made life in the city more joyful-and bearable-for millions of people over the decades.
While the phrase "church choir" usually evokes the image of a dowdy group of amateurs, the phrase "Choir of St. Patrick's Cathedral" has always meant something quite different. Salvatore Basile's splendid history shows just how different, and just how spectacular, the music of St. Patrick's is.

Fifth Avenue Famous: The Extraordinary Story of Music at St. Patrick's Cathedral (May, $29.95) by Salvatore Basile examines the 125-year history of its choir