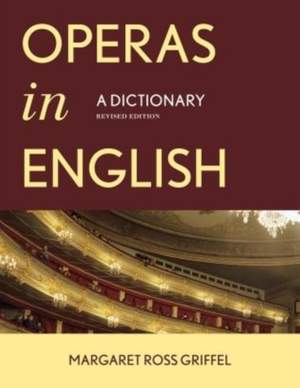 Operas in English: A Dictionary

In this revised and expanded edition of Operas in English: A Dictionary, Margaret Ross Griffel updates her work on operas written specifically to an English text, including not only works originally in English but also those set to new English librettos. Since the book's initial publication in 1999, Griffel has added nearly 900 new items, bringing the total number of entries in this new edition to 4,400, covering the world of opera in English from 1634 through 2011. The front matter includes a brief history of English opera, to "set the stage" for the dictionary entries that follow. Listed alphabetically, each opera entry includes alternative titles; a full, descriptive title; the number of acts; composer's name; librettist's name, with original language of the libretto; the source of the text (date, place, and cast of the first performance); date of composition (if it occurred substantially earlier than the premiere); similar information for the first U.S. (including colonial) and British (England, Scotland, Wales) performances; brief plot summary; main characters (names and vocal ranges, where known); names of noteworthy numbers; comments on special musical problems and techniques; other settings of the text, including non-English ones; other operas, if any, involving the same story or characters (cross references are indicated by asterisks). Entries include such information as first and critical editions of the score and libretto; a bibliography, ranging from scholarly studies to more informal journal articles and reviews; a discography; and information on video recordings. Operas in English features four appendixes, a selective bibliography, and two indexes. The first appendix lists composers, their places and years of birth and death, and their operas included in the text as entries; the second does the same for librettists; the third records authors whose works inspired or were adapted for the librettos; and the fourth comprises a chronological listing of the A-Z entries, including the date of first performance, the city of the premiere (or composition date if unperformed or performed much later), the short title of the opera, and the composer. There is a main character index and an index of singers, conductors, producers, composers of other settings, and other key figures.