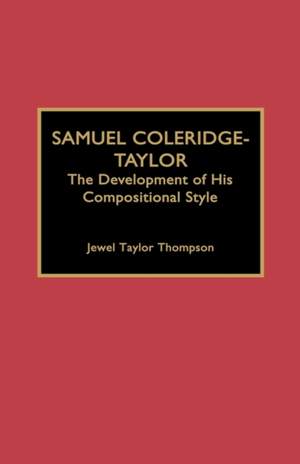 Samuel Coleridge-Taylor: The Development of His Compositional Style

Jewel Taylor Thompson and the Scarecrow Press deserve high praise for this excellent book on the first major figure in neo-African art music...it will inspire scholars to research and produce... — Research in African Literatures More…

During the late 1890s and early 1900s, Samuel Coleridge-Taylor (1875-1912) was a popular and important British composer. Respected by his contemporaries, such as Sir Arthur Sullivan, Sir Edward Elgar, Gustav Holst, and Ralph Vaughan Williams, he attracted the attention of the British music critics who followed his career with curious interest and often placed him in a class with other noted composers. A prolific composer during his short lifetime, he received great public acclaim and became known both nationally and internationally. Born of a West African doctor and a British mother, Coleridge-Taylor belonged to two decidedly different cultures. Therefore, his compositional style was affected by two underlying currents: the classical tradition that dominated his training at the Royal College of Music, and the Negro folk music that was introduced to him through contacts with members of his father's race. This volume traces the development of his compostional style, from his final years at the Royal College of Music, to the time of his death in 1912. The author uses examples from selected works to show the influence of classical procedures, West African and African-American elements, and English poetical dramas.

Jewel Taylor Thompson and the Scarecrow Press deserve high praise for this excellent book on the first major figure in neo-African art music...it will inspire scholars to research and produce studies of composers and other aspects of this important musical genre...Thompson's study of Coleridge-Taylor is a well-researched and superbly organized book, in which the author shows her command of speech discourse as a tool of musicology. Her analysis, always very perceptive and deep, shows her thorough understanding of Coleridge-Taylor's techniques of composition