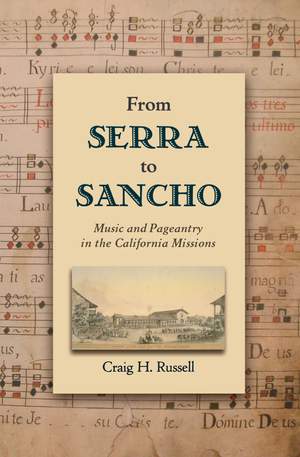 From Serra to Sancho: Music and Pageantry in the California Missions

Russell is, in my estimation the leading expert on music of the Hispanic-American world, and this is a major contribution to our knowledge of a music and a period long forgotten — The American Organist

Music in the California missions was a pluralistic combination of voices and instruments, of liturgy and spectacle, of styles and functions - and even of cultures - in a new blend that was non-existent before the Franciscan friars made their way to California beginning in 1769. From Serra to Sancho explores the exquisite sacred music that flourished on the West Coast of the United States when it was under Spanish and Mexican rule, delving into the historical, cultural, biographical, and stylistic aspects of California mission music during the late eighteenth and early nineteenth centuries. Author Craig H. Russell examines how mellifluous plainchant, reverent hymns, spunky folkloric ditties, "classical" music in the style of Haydn, and even Native American drumming were interwoven into a tapestry of resonant beauty. In addition to extensive musical and cultural analysis, Russell draws upon hundreds of primary documents in California, Mexico, Madrid, Barcelona, London, and Mallorca. It is through the melding together of this information from geographically separated places that he brings the mystery of California's mission music into sharper focus. Russell's groundbreaking study sheds new light on the cultural exchange that took place in the colonial United States, as well as on the pervasive worldwide influence of Iberian music as a whole.

Russell is, in my estimation the leading expert on music of the Hispanic-American world, and this is a major contribution to our knowledge of a music and a period long forgotten