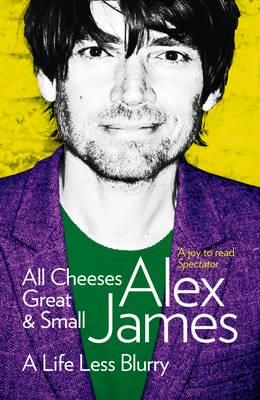 All Cheeses Great and Small: A Life Less Blurry

James's prose is clean and poetic. His childlike wonder at the simple things - from herons to heaps of rubble - can be infectious — The Telegraph

This is the story of Alex James's transition from a leading light of the Britpop movement in the 1990s, to gentleman farmer, artisan cheese-maker and father of five.

'I was hanging around the pigsty in the way I'd previously hung around at The Groucho Club. I felt wonderfully connected, grounded in the real world, standing in pig muck'

Following fifteen years in Blur, Alex James did two wild, unexpected things. He fell in love and he bought a farm.

Moving into a rambling, chaotic farmstead in the beautiful Cotswold countryside, he decides the best way to learn about farming is the same way he learned most about music: by jumping in and doing it. As his family settles in, he discovers the unexpected joys that country life abounds in: finding the first egg from your very own chicken, coming across a bramble bush laden with blackberries, roasting home-grown pears on an open fire, before stumbling on a new venture - making cheese.

Wonderfully warm, witty and perfectly observed, this is the story of what to do after you've been the bass player in one of the best bands in the world, and a life-affirming tale of just how much fun growing up and settling down can be.

'A joy to read. Prose flows and weaves and curls itself into pleasing rhythms...He can write like a god.' SPECTATOR

James's prose is clean and poetic. His childlike wonder at the simple things - from herons to heaps of rubble - can be infectious