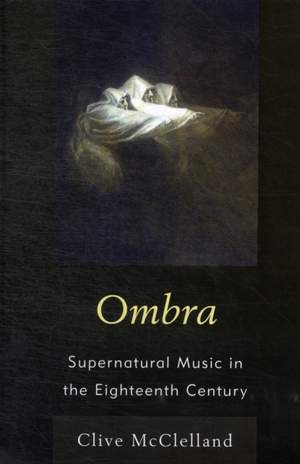 Ombra is the term which applies to an operatic scene involving the appearance of an oracle or demon, witches, or ghosts. Such scenes can be traced back to the early days of opera and were commonplace in the seventeenth century in Italy and France. Operas based on the legends of Orpheus, Iphigenia, and Alcestis provide numerous examples of ombra and extend well into the eighteenth century. Clive McClelland's Ombra: Supernatural Music in the Eighteenth Century is an in-depth examination of ombra and is many influences on classical music performance. McClelland reveals that ombra scenes proved popular with audiences not only because of the special stage effects employed, but also due to increasing use of awe-inspiring musical effects. By the end of the eighteenth century the scenes had come to be associated with an elaborate set of musical features including slow, sustained writing, the use of flat keys, angular melodic lines, chromaticism and dissonance, dotted rhythms and syncopation, tremolando effects, unexpected harmonic progressions, and unusual instrumentation, especially involving trombones. It is clearly distinct from other styles that exhibit some of these characteristics, such as the so-called 'Sturm und Drang' or 'Fantasia.' Futhermore, parallels can be drawn between these features and Edmund Burke's 'sublime of terror,' thus placing ombra music on an important position in the context of eighteenth-century aesthetic theory.