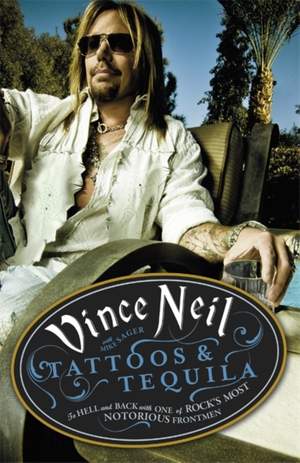 Tattoos & Tequila: To Hell and Back With One Of Rock's Most Notorious Frontmen

An explosive biography of one of America's most notorious bands - Moetley Crue.

Moetley Crue were formed in Los Angeles in 1981, and have since gone on to become one of America's biggest-selling and notorious heavy metal acts, with nine studio albums and over 80 million album sales. Acquiring huge success by the end of the 1980s with their mixture of heavy metal and glam rock, singer Vince Neil's 'glam' look even supposedly inspired the hit Aerosmith song 'Dude (Looks Like A Lady)'. In 1992 Neil left the band to pursue a solo career before returning in 1997. The band went into hiatus in 2000 before reuniting in 2004.

In TATTOOS & TEQUILA, Vince Neil chronicles his personal experiences as singer and frontman for Moetley Crue, and his time as a participant on reality shows. Moetley Crue were a band who always lived up to the typical image of the 'rock and roll' lifestyle, and this is captured firsthand by Neil, who writes candidly about the band's struggles with drugs, alcohol and the law. These include incidents such as bass guitarist Nikki Sixx's near fatal heroin overdose in 1987. He also details his marriages to date, as well as movingly writing about the death of his daughter Skylar from cancer in 1995. The result is a compelling look at a band and a man who have seen many highs and lows in their career.

A highly-anticipated film following the group's formidable ascent to the top of the '80s rock scene will be released in February 2018.