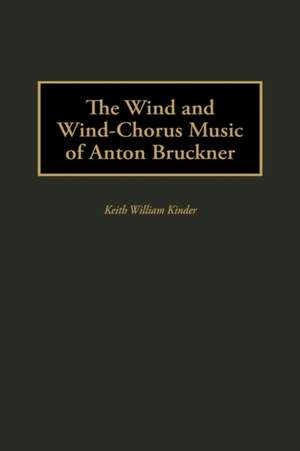 The Wind and Wind-Chorus Music of Anton Bruckner

Kinder makes a valuable addition to the literature on one of history's most important, yet enigmatic, composers....The original theoretical analyses bring to light useful ideas about compositional... — Choice More…

This comprehensive study treats the wind works of Anton Bruckner as a complete genre and uses them to illustrate how the composer evolved in style throughout his career. A major nineteenth-century composer, organist, and church musician, Bruckner's compositional style changed dramatically in the early 1860s, dividing his career into two distinct parts. During his early career he immersed himself in the study of traditional musical principles including form, harmony, counterpoint, and orchestration. The second phase of his career, in which he composed the symphonies upon which much of his current reputation rests, was marked by his experimental approaches to harmony and tonality. Many of his early compositions exhibit landmarks of his later style. The wind instrument pieces incorporate the best aspects of both of Bruckner's styles and reflect the progress of his professional life.

Organized chronologically, the music is studied and classified within set time periods. Each wind work of a particular period is reviewed according to the historical circumstances contributing to its creation, its specific musical content, and its success as a musical work in relation to wind music and specifically to Bruckner's development. The analyses of Bruckner's compositions are enhanced by musical examples throughout the text.

Kinder makes a valuable addition to the literature on one of history's most important, yet enigmatic, composers....The original theoretical analyses bring to light useful ideas about compositional style and the overall structure of the music....Kinder's fine work will add to the understanding of this great Austrian composer