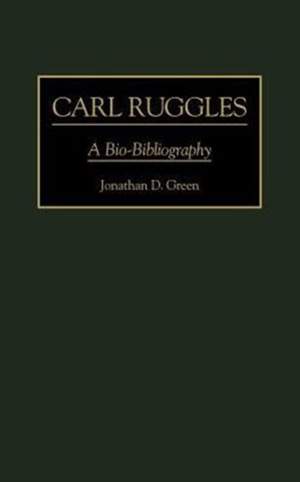 Carl Ruggles (1876-1971) was the epitome of the New England iconoclast. A composer of the American avant-garde movement, he wrote, in a very concise and dissonant style, a small body of truly unique musical works. He lived to be 95, composing to the very end of his life, but left behind a mere eight sanctioned works which he had rewritten and refined over decades. In the 1920s, he was at the focal point of ultra-modern music-making. Since there is currently a renewed interest in his work, this bio-bibliography is timely and needed, and of interest to scholars, students, and performers.

During the 1920s, had Edgard Varese or Charles Ives been asked to name America's greatest living composer, the response would have been Carl Ruggles. Forty years later, such eminent experts on American music as Nicolas Slonimsky, Virgil Thomson, and Aaron Copland would each describe Ruggles as our most technically refined composer. Ruggles, with Varese and Ives, was the standard-bearer of the atonal movement in this century's third decade. With the rise of American realism, he slipped out of the public eye. Recent years have seen a resurgence of performances of his works and research on his music; consequently, there is a need for this timely bio-bibliography.