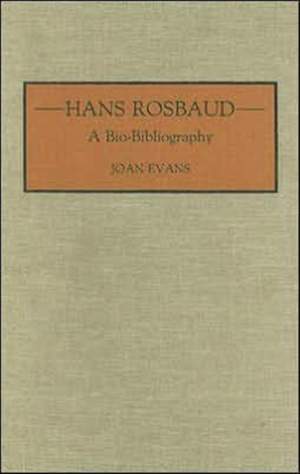 Austrian conductor Hans Rosbaud was a leading figure in European musical life from the late 1920s until his death in 1962. Internationally respected as a conductor of Mozart and Haydn, Bruckner and Mahler, his posthumous reputation rests primarily on his standard-setting performances of modern music. In this complete research tool, musicologist Joan Evans brings together all the materials vital for a full assessment of his career. The eminent composer and conductor Pierre Boulez presents his personal recollections of Rosbaud in a foreword.

Because Rosbaud's primary sphere of activity was radio, he made relatively few commercial recordings, but his broadcast recordings number in the hundreds. Evans carefully documents all commercial and private recordings, also providing a biography of the conductor, a section of first performances and an annotated bibliography comprising books, articles, record and concert reviews, radio interviews, and documentary broadcasts. A career chronology appears as an appendix, and a description of his musical compositions and other papers, as well as a list of the works he conducted at the annual Donaueschingen Festival, comprise further appendixes. All sections are fully cross referenced and indexed, thereby providing ready access to this wealth of data.