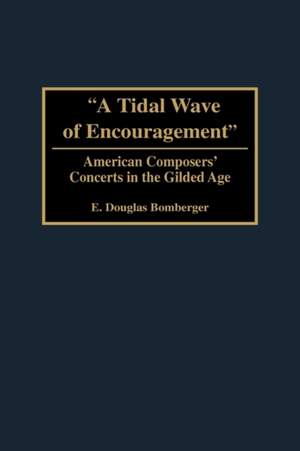 A Tidal Wave of Encouragement: American Composers' Concerts in the Gilded Age

Expertly researched and elegantly written, this book is an indispensable addition to the core library of books on American music history. All readers — Choice

In July of 1884, pianist Calixa Lavallee performed a recital of works by American composers that began a highly influential series of such concerts. Over the course of the next decade, hundreds of all-American concerts were performed in the United States and Europe, a movement that fostered both the development and the perception of American music as a unique art form. A Tidal Wave of Encouragement-the title of which is derived from one observer's description of the movement-is the first in-depth study of this significant period in American music. Providing a comprehensive history of the Concerts as well as detailed accounts of the intense critical debate surrounding them, author E. Douglas Bomberger reveals how one decade shaped the future of American classical music and very much impacted the way we hear it today.

The movement, crucial in focusing discussion on American music and providing performance opportunities for composers and musicians for whom no such opportunities had before existed, was far more extensive and widespread than most scholarship had credited it. This oversight is due in large part to the dearth of objective studies of the Concerts; previous considerations have tended either toward the merely nostalgic or toward the unnecessarily disparaging. Bomberger's work is a corrective to this, as well as much-needed historical and critical account of a project whose influence had yet to be fully acknowledged.

Expertly researched and elegantly written, this book is an indispensable addition to the core library of books on American music history. All readers