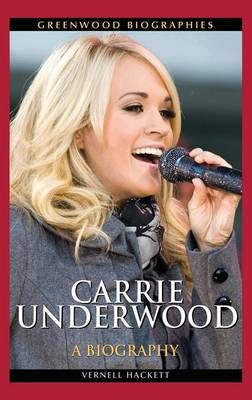 In this book, follow the career of Carrie Underwood as she goes from the American Idol competition to worldwide celebrity.

Carrie Underwood: A Biography follows the singer from a small town in Oklahoma to the stages of the most prestigious concert halls in the world. Along the way, fans will read about this girl-next-door's decision to compete on American Idol and her subsequent triumph there, about her first recordings in Nashville and her platinum albums, and about her sold-out concert tours with superstars like Brad Paisley, Kenny Chesney, and Keith Urban.

But the book isn't only about Underwood as a celebrity. It is also about how she uses that celebrity to do good works, including speaking out for the Humane Society of the United States, participating in a song that benefited Stand Up For Cancer, doing public service announcements for the Do Something youth organization, and touring for the USO.