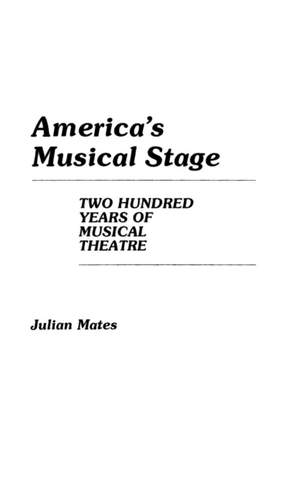 In this history Mates stresses the long tradition of musical theater in the US, reaching back to the pre-Revolutionary period. This tradition has incorporated, over the years, elements from all... — Choice More…

Mates shows the musical stage in all its guises--from burlesque to musical comedy to grand opera--from its beginnings in pre-Revolutionary America to the present day. He deals sensitively with the recurrent aesthetic question of popular versus highbrow art and also looks at critical reactions to popular theatrical forms of musical entertainment. He introduces the reader to various types of theatrical companies, the changing repertory, and the many kinds of musical performers who have animated the stage. Mates focuses on the creative relationships between the different forms of opera, the minstrel show and circus, melodrama and dance, burlesque, revue, vaudeville, and musical comedy.

In this history Mates stresses the long tradition of musical theater in the US, reaching back to the pre-Revolutionary period. This tradition has incorporated, over the years, elements from all other forms of theatrical entertainment--opera, melodrama, circus, ballet, vaudeville, minstrel shows, and burlesque.... Through his emphasis on early theater--an outgrowth of his The American Musical Stage Before 1800 (1962)--Mates refutes histories that begin their accounts with The Black Crook of 1866.... The work is well documented, and the author provides a bibliographical essay as well as a short index.... With its wealth of information about the musical's earlier years and its scholarly approach, the volume is recommended for academic libraries and larger public libraries