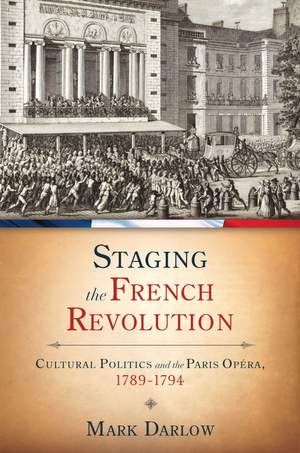 Staging the French Revolution: Cultural Politics and the Paris Opera, 1789-1794

The first in-depth study of the relationship of the revolution to lyric theater...Recommended — Choice

Over the last decade, the theatre and opera of the French Revolution have been the subject of intense scholarly reassessment, both in terms of the relationship between theatrical works and politics or ideology in this period and on the question of longer-scale structures of continuity or rupture in aesthetics. Staging the French Revolution: Cultural Politics and the Paris Opera, 1789-1794 moves these discussions boldly forward, focusing on the Paris Opera (Academie Royale de Musique) in the cultural and political context of the early French Revolution. Both institutional history and cultural study, this is the first ever full-scale study of the Revolution and lyric theatre. The book concentrates on three aspects of how a royally-protected theatre negotiates the transition to national theatre: the external dimension, such as questions of ownership and governance and the institution's relationship with State institutions and popular assemblies; the internal management, finances, selection and preparation of works; and the cultural and aesthetic study of the works themselves and of their reception. In Staging the French Revolution, author Mark Darlow offers an unprecedented view of the material context of opera production, combining in-depth archival research with a study of the works themselves. He argues that a mixture of popular and State interventions created a repressive system in which cultural institutions retained agency, compelling individuals to follow and contribute to a shifting culture. Theatre thereby emerged as a locus for competing discourses on patriotism, society, the role of the arts in the Republic, and the articulation of the Revolution's relation with the 'Old Regime', and is thus an essential key to the understanding of public opinion and publicity at this crucial historical moment. Combining recent approaches to institutions, sociability, and authors' rights with cultural studies of opera, Staging the French Revolution takes a historically grounded and methodologically innovative cross-disciplinary approach to opera and persuasively re-evaluates the long-standing, but rather sterile, concept of propaganda.

The first in-depth study of the relationship of the revolution to lyric theater...Recommended