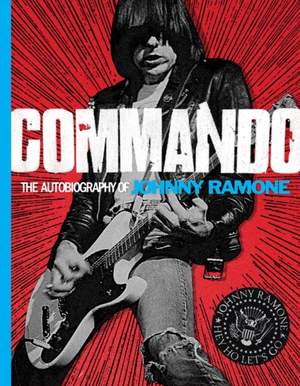 Commando: The Autobiography of Johnny Ramone

Raised in Queens, where he worked as a plumber while honing his guitar skills, Johnny Ramone eventually became a founding member of The Ramones, one of the most influential rock bands of all time. Often called the first punk rock outfit, their status is now legendary. But despite becoming an international star when he was alive, Johnny never really strayed from his blue-collar roots and attitude. His bouts of delinquency as a kid might have given way to true discipline when it came to keeping the band in line, but he was truly imbued with the angr y-young-man spirit that would characterise his persona on and off stage. Johnny was the driving force behind the Ramones, sometimes referred to as a drill sergeant, bringing order and regiment to the band. This was evident in the speed, accuracy and intensity of their music. Johnny kept the band focused and moving forward, ultimately securing their place in rock history. The Ram ones were inducted into the Rock and Roll Hall of Fame in 2002 and two years later, Johnny dies of cancer, outliving the other two founding members and getting the last and complete word. Brutally honest, revealing and touching, this is Johnny Ramones's story and the story of the Ramones from start to finish, told in his own words and on his own terms. In addition to his story, the book will contain Johnny's annotated and graded assessment of the Ramones' albums, a number of eccentric Top Ten Lists; favourite Elvis films, favourite Republicans [Johnny was actually pretty conservative], favourite horror films, pages from his legendary "black books" with notes on concerts, inspirations, anecdotes and scores of black and white and colour photos, many of which have not been published before.