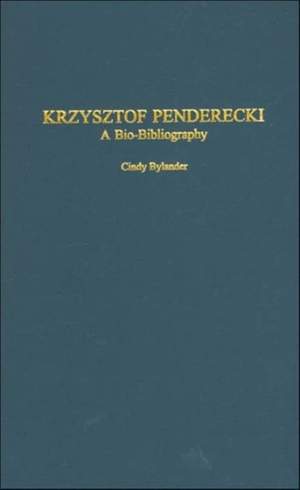 This annotated bibliography is an excellent starting point for studying Krzysztof Penderecki, one of the great Polish composers of the 20th century. It is comprised of over 1,400 books, articles, and other writings that were published in North America, England, Poland, Germany, and France through 1998, the year of Penderecki's 65th birthday.

The exhaustive listings make this an excellent resource for research on this composer. The works lists includes many of the compositions that he did for puppet theater and incidental works for theater-which are not normally cited in other lists of his music-along with world premieres and selected presentations such as Polish or American premieres, and the discography contains information about recordings released through 2003. Finally, the appendices include a chronological list of Penderecki's compositions and a list by his works genre.