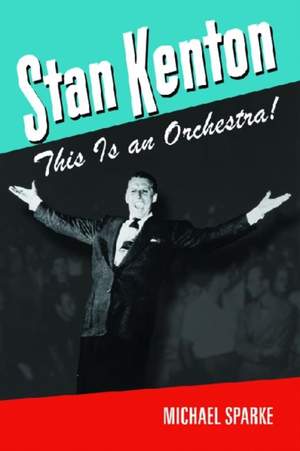 Stan Kenton: This Is an Orchestra!

Stan Kenton (1911-1979) formed his first full orchestra in 1940 and soon drew record-breaking crowds to hear and dance to his exciting sound. He continued to tour and record unrelentingly for the next four decades. Stan Kenton: This Is an Orchestra! sums up the mesmerizing bandleader at the height of his powers, arms waving energetically, his face a study of concentration as he cajoled, coaxed, strained, and obtained the last ounce of energy from every musician under his control.

Michael Sparke's narrative captures that enthusiasm in words: a lucid account of the evolution of the Kenton Sound, and the first book to offer a critical evaluation of the role that Stan played in its creation. Insightful and thought-provoking throughout, and supported by liberal quotes from the musicians who made the magic, even at his most contentious the author's high regard and admiration for his subject shines through. The most knowledgeable of Stan's fans will learn new facts from this far-reaching biography of a man and his music. Stan Kenton will be essential reading for every Kenton devotee and jazz historian.