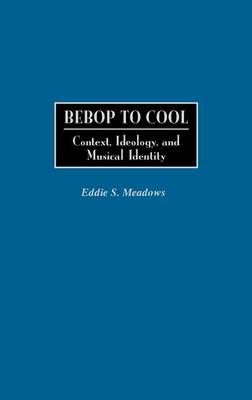 Meadows undertook a huge challenge when he set out, first, to describe and analyze modern jazz in terms of the historical context musically, socially, politically, and culturally and, second,... — Choice More…

Bebop music is more than a jazz movement that seemed to have burst suddenly upon the jazz scene-it is an outgrowth of the sociocultural environment dating from the 1920s through the 1940s. In this consideration of the period and its music, noted jazz scholar Eddie S. Meadows traces the cultural and ideological context that produced Bebop and advocates that Cool Jazz was a reaction to Bebop, a natural outgrowth of its predecessor. Unlike most jazz research on the subject, ^IBebop to Cool^R features insider perspectives on both the social context of the music and the music itself, as a means of capturing the musical aesthetics and the cultural spirit of the time.

The volume includes the perspectives of Marcus Garvey, W. E. B. DuBois, and other leaders of the Harlem Renaissance; also discussed here for the first time is the role that Islam played in the music's development. Finally, in identifying and discussing the work of such significant musicians as Miles Davis, Dizzy Gillespie, Thelonious Monk, Charlie Parker, and Stan Getz, Meadows demonstrates their unique musical identities within the respective genres that compose the revolutionary Bebop and Cool Jazz movements.

Meadows undertook a huge challenge when he set out, first, to describe and analyze modern jazz in terms of the historical context musically, socially, politically, and culturally and, second, to explore the characteristics of modern jazz as it existed in the middle of the 20th century....Meadows provides some balance to those who look at jazz history primarily as a musical development without adequate attention to the world in which it exists. The author achieves a major goal by providing a context in which to view the world of modern jazz. Essential. Upper-division undergraduates through faculty and professionals