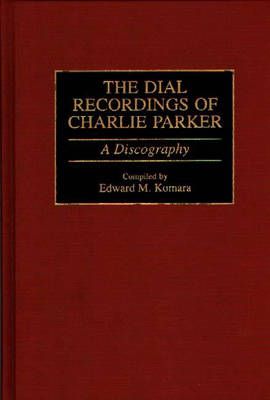 The Dial Recordings of Charlie Parker: A Discography

Another in the impressive series of discography from Greenwood Press....Mr. Komara has done a super job in detailing the Comet and Dial sessions of Charlie Parker....This book will prove indispensable... — IAJRC Journal More…

Dial Records catered to jazz musicians and record collectors. Charlie Parker was one of the major jazz artists to record with Dial. His Dial sessions occurred at the personal depths and artistic peaks of his career during which he introduced a number of such jazz staples as Ornithology and Scrapple from the Apple. His ten sessions associated with Dial are presented in detail and include the repertory, original issues and reissues, titles and notated transcriptions, and analyses of performances. Commentary explains many of the titles to Parker's pieces and collates the various recordings in which he performed his Dial repertory outside the confines of the Dial studios; these celebrated performances helped to shape modern jazz.

In addition to the catalogue of Parker's Dial recordings, jazz historians and scholars alike will appreciate the historical narrative detailing the evolution of Dial Records, its owner Ross Russell, and its business relations with Charlie Parker. This examination of the 1940's jazz record business sheds light on the dissemination of jazz via records. Five appendices complete this well organized and thorough study of Charlie Parker and his legendary Dial recordings.

Another in the impressive series of discography from Greenwood Press....Mr. Komara has done a super job in detailing the Comet and Dial sessions of Charlie Parker....This book will prove indispensable for years to come in serving as an argument settler, among other things. It is an important volume for any serious Bird fan and recommended to others as well