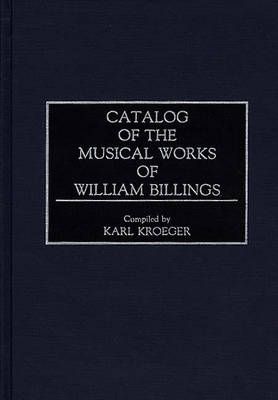 Catalog of the Musical Works of William Billings

William Billings (1746-1800) was the most important native-born composer of the American colonial and Federal eras. He wrote hundreds of choral compositions, which were set to sacred or devotional texts for use by church choirs, singing schools, and musical societies. Extremely popular in his own time, Billings's music was denigrated during the nineteenth century when European styles governed American musical tastes. In the twentieth century his genius was recognized, and his music is widely sung and studied. Originally published in six tunebooks, the 338 extant pieces were issued in a scholarly edition by the American Musicological Society and The Colonial Society of Massachusetts as The Complete Works of William Billings (4 vols., 1977-1990). The present catalog complements the Complete Works by serving as a guide to its contents and providing a wealth of additional data.

Included for each composition are exact title; text source; first line; technical information on length, meter, key, and melody; manuscript sources and contemporaneous reprints; bibliography and modern recordings. An extensive list of works cited is followed by five indexes providing access to the material in the catalog by first line of text, Billings's anthem titles, text sources, musical form (tune types), and musical incipits. The catalog provides for Billings's music information similar to that found in Schmeider's listings for Bach and Koechel's listings for Mozart.