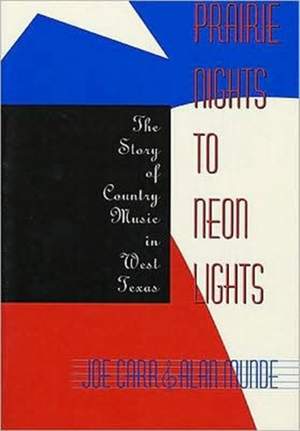 Prairie Nights to Neon Lights: The Story of Country Music in West Texas

This title is winner of the Belmont University Prize for Best Book on Country Western Music. Alan Munde and Joe Carr are the best known as superb bluegrass musicians. In this book they demonstrate that they are also good historians, and that they understand the full range of styles generally associated with country music. And better than anyone else so far, they have described and explained the vital contributions made by West Texas musicians to the music of America and the world. Ever since the Amarillo fiddler Eck Robertson inaugurated country music's commercial history with his first recordings in 1922, West Texas musicians have played major innovative roles in the shaping and popularization of the nation's popular music forms. The Beatles emerged from the gritty industrial world of Liverpool, but their musical roots run directly to Buddy Holly and the Texas plains. People who have wondered how such remarkable music talent could emerge from the vast seemingly empty landscape of West Texas need look no farther than this important and compelling book. Bill C. Malone West Texas music, like the West Texas wind, is hard to describe, but once it blows by, it's hard to forget. This book is a powerful historical documentation of that music and the musicians who brought it to life. I love it! Sonny Curtis It's a wonderful book, and the title says it all. When you grow up with country music, you never stray far from it because a Texan is a Texan is a Texan. Waylon Jennings. Picker/teachers Joe Carr and Alan Munde have written a wholly delightful, informative book. Billboard Magazine Joe Carr is a well-known and respected musician and teacher. He plays the guitar, mandolin, and fiddle. He has been a member of the commercial music faculty at South Plains College since 1984. Carr toured nationally with Munde in the bluegrass group Country Gazette and currently performs in a duo with Munde. In addition to his many audio recordings, Carr has produced over twenty music instruction videos for Texas Music and Video. Alan Munde is a world-class five string banjo player and is featured as a major stylist in the book Masters of the Five String Banjo. He joined the commercial music faculty at South Plains College in 1986. He is a founding member of the group Country Gazette and he currently tours with Carr. Munde is on the board of directors of the International Bluegrass Music Association. He has recorded more than twenty albums and he is a leader in the field of five string-banjo instruction.