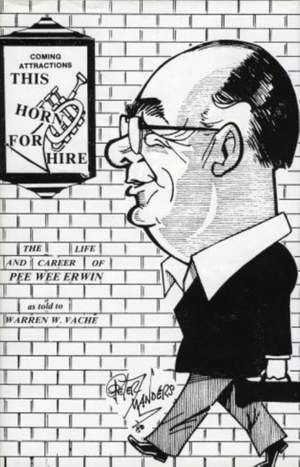 the reader gets an excellent overview of the music business...well-written — Cadence More…

George "Pee Wee" Erwin devoted a lifetime to American music. During his long and distinguished career as a professional trumpet player he was in constant demand by the foremost bandleaders and conductors in radio, the movies, recordings, TV, and stage shows, and was active in every phase of the music business. For a time he led his own big band, and later he fronted all-star Dixieland groups at the world-famous Greenwich Village night spot, Nick's, the Metropole, and other jazz clubs around the country. Pee Wee's wide experience, coupled with his fantastic gift for recall, gives insight into the musical history he helped create. A great deal has been written, much of it second-hand, about the period between the World Wars when American music was developing, but Pee Wee's narrative lets us relive the time through the vivid recollections of a man who entered the scene at an early age and remained an active participant.

the reader gets an excellent overview of the music business...well-written

Presented with friendly care...offers much to whet and warrant a jazz-buff's interest