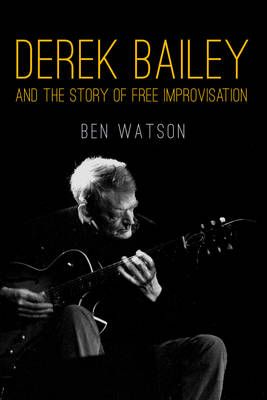 Derek Bailey: And the Story of Free Improvisation

This brilliant biography of the cult guitar player makes you forget everything you think you know about jazz improvisation, post punk and the avant-garde Derek Bailey was at the top of his profession as a dance-band and record-session guitarist when, in the early 1960s, he began playing an uncompromisingly abstract music. As the Joseph Holbrooke Trio, with bassist Gavin Bryars and drummer Tony Oxley, Bailey forged a musical syntax which has since operated as an international counter to the banality of commercialism. Refusing to be labeled a "jazz" guitarist, Bailey has collaborated with performance artists, electronic experimentalists, classical musicians, Zen dancers, tap dancers, rock stars, jazzers, poets, weirdos and an endless stream of fiercely individual musicians. Today his anti-idiom of "Free Improvisation" has become the lingua franca of the "avant" scene, with Pat Metheny, John Zorn, David Sylvian and Sonic Youth's Thurston Moore amongst his admirers. Derek Bailey and the Story of Free Improvisation lifts the lid on an artistic ferment which has defied every known law of the music business. Telling the story via taped interviews with Bailey and his cohorts, gig reports and album reviews (including an exhaustive discography of Bailey's vast and hard-to-track output), Ben Watson's spiky, partisan and often very funny biography argues that anyone who thought the avant-garde was dead simply forgot to listen.