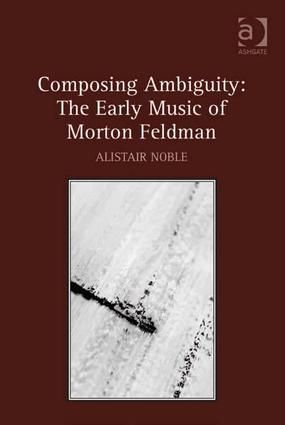 American composer Morton Feldman is increasingly seen to have been one of the key figures in late-twentieth-century music, with his work exerting a powerful influence into the twenty-first century. At the same time, much about his music remains enigmatic, largely due to long-standing myths about supposedly intuitive or aleatoric working practices. In Composing Ambiguity, Alistair Noble reveals key aspects of Feldman's musical language as it developed during a crucial period in the early 1950s. Drawing models from primary sources, including Feldman's musical sketches, he shows that Feldman worked deliberately within a two-dimensional frame, allowing a focus upon the fundamental materials of sounding pitch in time. Beyond this, Feldman's work is revealed to be essentially concerned with the 12-tone chromatic field, and with the delineation of complexes of simple proportions in 'crystalline' forms. Through close reading of several important works from the early 1950s, Noble shows that there is a remarkable consistency of compositional method, despite the varied experimental notations used by Feldman at this time. Not only are there direct relations to be found between staff-notated works and grid scores, but much of the language developed by Feldman in this period was still in use even in his late works of the 1980s.