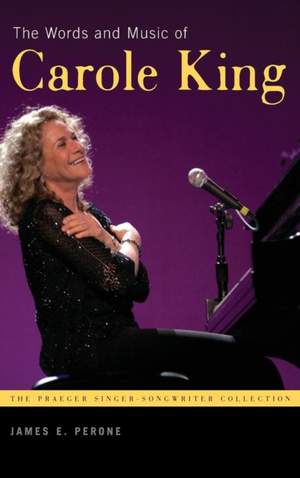 The Words and Music of Carole King

This long overdue examination of Carole King offers her legions of fans the chance to see how her work has developed over time, understand what her music means to other contemporary performers, and grasp its significance in American music at large.

Name a Carole King song. Anyone who's been a fan of popular music over the past 45 years should be able to do it with ease. Will You Still Love Me Tomorrow?, Take Good Care Of My Baby, The Locomotion, One Fine Day, Up On The Roof, A Natural Woman, I Feel The Earth Move, Smackwater Jack, It's Too Late, So Far Away, You've Got A Friend. Few writers can claim such a formidable catalogue. Fewer still can with justice claim to have spoken for a generation.

After collaborating with Paul Simon in high school and composing hits for The Shirelles; Aretha Franklin; The Monkees; Blood, Sweat & Tears; and other artists throughout the 1960s, Carole King launched herself into the spotlight with the 1971 album Tapestry. Tapestry sold over 22 million copies, and was one of the most important feminist statements of the day, not just because of the words or music, but because King maintained almost total control over her product. Carole King has continued composing and performing breakthrough work since Tapestry, though over the past 15 years audiences are more likely to have heard her music in films such as One True Thing, You've Got Mail, and A League of Their Own.

In 1988, the National Academy of Songwriters presented King and her one-time husband and collaborator Gerry Goffin with the Lifetime Achievement Award. Goffin and King were inducted into the Rock and Roll Hall of Fame as non-performers in 1990. Carole King was inducted into the Songwriters Hall of Fame in 1986. Although Tapestry still stands as King's masterpiece, she recorded many other albums, including Fantasy, Colour of Your Dreams, City Streets, Pearls, Wrap Around Joy, Touch the Sky, Simple Things, Thoroughbred, Love Makes the World, Welcome Home, and Really Rosie. All of these are discussed in the course of this volume, as are songs covered and performed by other artists.