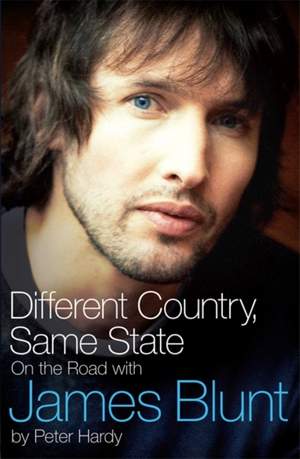 Different Country, Same State: On The Road With James Blunt

213 performances, 58 countries, 15 months. James Blunt's 'All the Lost Souls' international tour was one of the greatest pop marathons of all time.

Journalist and family friend Peter Hardy joined James and his band on their exhilarating and exhausting journey around the world, hoping to discover the man behind the music. From the tour bus to the dressing rooms, from the stage to the after-show parties, travelling with James gave 'Weird Uncle Peter' an access-all-areas pass to his life on tour.

A warts-and-all account of lost guitars, adoring fans, ludicrous bar bills and very, very late nights, this is an honest, amusing and insightful look at the mad world of celebrity and the inside story of James himself, both in front of the crowds and behind closed doors.