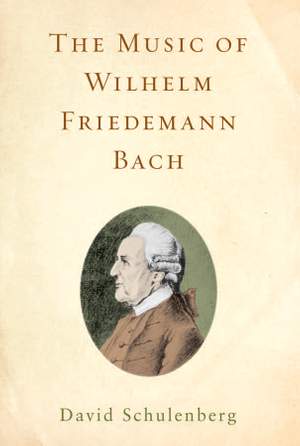 The Music of Wilhelm Friedemann Bach

Schulenberg has a grasp of music's grammar not often met with in current musicology [.] There is something touching about Friedemann's originalities [.] Here one can fancy him swerving away from... — Musical Times More…

The first-born of the four composer sons of Johann Sebastian Bach, Wilhelm Friedemann was often considered the most brilliant. Yet he left relatively few works and died in obscurity. This monograph, the first on the composer in nearly a century, identifies the unique features of Friedemann's music that make it worth studying and performing. It considers how Friedemann's training and upbringing differed from those of his brothers, leading to a style that diverged from that of his contemporaries. Central to the book are detailed discussions of all Friedemann's extant works: the virtuoso sonatas and concertos for keyboard instruments, the extraordinary chamber compositions (especially for flute), and the hitherto-neglected vocal music, including sacred cantatas and a remarkable work in honor of King Frederick the Great of Prussia. Special sections consider performance questions unique to Friedemann's music and provide a handy list of his works and their sources. Numerous musical examples provide glimpses of many little-known compositions, including a concerto ignored by previous students of Friedemann's music, here restored to hislist of works.   David Schulenberg, Professor of Music at Wagner College in New York City, has performed much of W. F. Bach's output on harpsichord, clavichord, and fortepiano. His previous writings include The Keyboard Music of J. S. Bach and The Instrumental Music of C. P. E. Bach.

Schulenberg has a grasp of music's grammar not often met with in current musicology [.] There is something touching about Friedemann's originalities [.] Here one can fancy him swerving away from previous composers