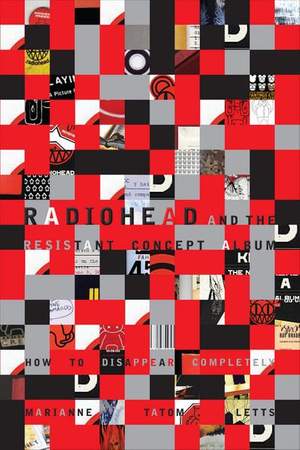 Radiohead and the Resistant Concept Album: How to Disappear Completely

This is the kind of text that could likely transform a college-level music theory course for the better, prompting discussions about everything from the structure of modern rock music to the... — Popmatters More…

How the British rock band Radiohead subverts the idea of the concept album in order to articulate themes of alienation and anti-capitalism is the focus of Marianne Tatom Letts's analysis of Kid A and Amnesiac. These experimental albums marked a departure from the band's standard guitar-driven base layered with complex production effects. Considering the albums in the context of the band's earlier releases, Letts explores the motivations behind this change. She places the two albums within the concept-album/progressive-rock tradition and shows how both resist that tradition. Unlike most critics of Radiohead, who focus on the band's lyrics, videos, sociological importance, or audience reception, Letts focuses on the music itself. She investigates Radiohead's ambivalence toward its own success, as manifested in the vanishing subject of Kid A on these two albums.

This is the kind of text that could likely transform a college-level music theory course for the better, prompting discussions about everything from the structure of modern rock music to the sometimes conflicted triangular relationship between performers, media and the masses. And, needless to say, it's required reading for Radiohead cultists. 2/8/2011