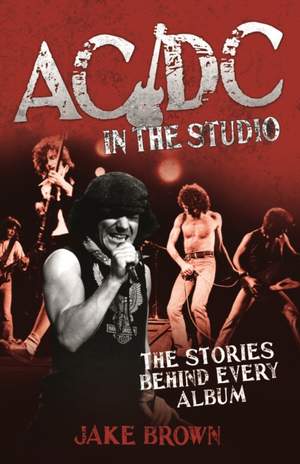 AC/DC in the Studio: The Stories Behind Every Album

AC/DC have reigned over rock'n'roll for almost four decades. Their signature power chord rock was the sonic standard bearer of the genre they pioneered, summarised in Rolling Stone's declaration that they are 'one of the top hard rock bands in history'. The group has transcended their Australian roots to become a global phenomenon. Their albums consistently go platinum and they have earned their reputation as one of the best bands on the planet. The band's live arsenal includes 'It's a Long Way to the Top (If you Want to Rock'n'Roll)', 'Highway to Hell' and 'You Shook Me All Night Long' (which Billboard called 'the greatest one-night-stand anthem in rock history') and their influence is felt today as strongly as ever. Their most recent release Black Ice sold more than 1.5 million copies in its first week in 2008, making history by debuting at No 1 on album charts in 29 countries simultaneously. The record would go on to sell seven milion copies worldwide, spending serveral weeks in the top of the Billboard Top 200. As late as 2009 they were still getting the honours - winning the Best Hard Rock Performance Grammy over the likes of Alice in Chains, Linkin Park, Nickelback and Metallica.