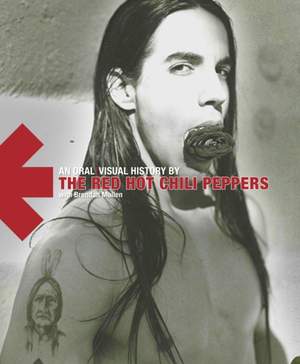 Explosive, uncensored and always revelatory, Red Hot Chili Peppers is the long-awaited, never-before-told history of the globe's most worshipped rock band. Loaded with rare and unpublished photographs and memorabilia from their own archives, the band finally reveal all, allowing unprecedented access into their wild inner world.

Few '80s groups smashed as many musical barriers as the Red Hot Chili Peppers. They created an intoxicating new musical style by mixing punk with funk and a dose of hard rock, topping it off with front-man Anthony Kiedis's rapping/riffing vocals and an explosive stage show to boot. The Chilis spawned a slew of imitators, but were still leaders of the pack at the dawn of the 21st century.

But despite the multiple Grammy Awards and the numerous records they've smashed - including the record for the most number one singles on the Billboard Modern Rock Chart (11) and for spending an astonishing 81 weeks at number one - the band have had their fair share of tragedy and bust-ups. Formed in 1983 by school friends Anthony Kiedis, Michael Balzary and Hillil Slovak, the band exploded onto the music scene with their 1988 debut Freaky Styley - but looked set to implode shortly afterwards when guitarist Slovak died of a heroin overdose.

In memory of their friend Slovak the Chilis stayed together, and with new guitarist John Frusciante and Chad Smith on drums they went on to storm the international stage with singles such as 'Give It Away' and 'Under the Bridge'. But, once again, great excess brought great excess. Like his predecessor, Frusciante became addicted to hard drugs and abruptly left the band mid-tour in early 1992. Tragic rumours circulated that the guitarist was homeless and penniless with a death-defying drug habit.

But, thankfully for his fans, Frusciante conquered his demons and came back from the edge with gusto. The rest - as they say - is rock history, with the release of such explosive, chart-topping albums as Californication and By the Way.

The sweaty, energetic, oft-naked live performances; the enormous public battles with drug addiction; the incessant partying and the ever-changing line-up; it's all in here, in the ultimate authorized celebration of the RED HOT Red Hot Chili Peppers.