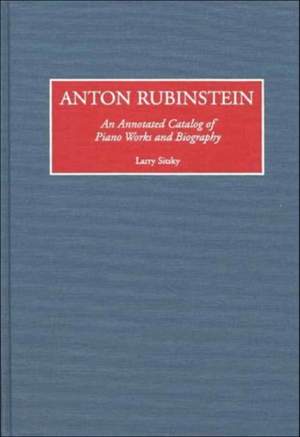 Anton Rubinstein: An Annotated Catalog of Piano Works and Biography

Anton Rubinstein, a seminal figure in Russian music, was not only a great pianist but also a monumental influence in Russian music education. Rubinstein is responsible for laying the groundwork for Russia's tertiary educational system for the training of musicians and for establishing the use of Western structural forms in Russian music. He later became the foundation director of the St. Petersburg Conservatory. Detailing Rubinstein's pianistic and conducting repertoire, this work provides insight into Russian nineteenth-century performance practice, and the biography presents a sober assessment of Rubinstein's place in history. The author has researched valuable Russian sources to make this assessment of Rubinstein available in English and has provided informative guidelines for further research.

In attempting to reinstate Rubinstein as an important figure in the history of Russian and international music, this study makes available to conductors and musicologists updated information on an important nineteenth-century music figure and an aspect of Russian music that has either been forgotten or ignored. Researchers and scholars will appreciate the annotated thematic catalog that includes all of Rubinstein's many works for piano, the extensive repertoire lists, and the extensive bibliography.