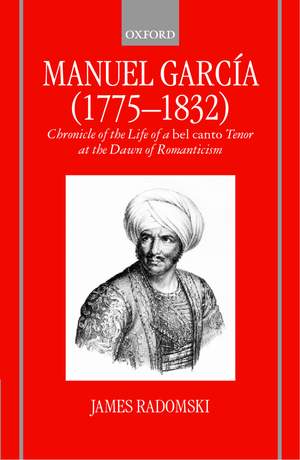 Manuel Garcia (1775-1832): Chronicle of the Life of a bel canto Tenor at the Dawn of Romanticism

James Radomsik's new biography brings vividly to life the theatre world of Madrid, Paris and London in the early years of the 19th Century ... the intricacies and intriques of Spanish cultural... — Opera Magazine More…

This is the first comprehensive biography of one of opera history's most glorious Spanish tenors. Apart from being renowned as the opening-night tenor in Rossini's Barber of Seville, Garcia was an important popularizer of other Rossini roles as well as those of Mozart (in particular, Don Giovanni) in Paris and London during the 1820s. As one of the first intercontinental superstars, Garcia directed the initial professional Italian opera performances in New York City in 1825 and in Mexico City in 1827. Apart from his extraordinary singing career, Garcia was also an important composer. His early operettas were extremely popular in Madrid, his Il califfo di Bagdad achieved success in Naples and Paris, and his La mort du Tasse was premiered at the Paris Opera. Garcia's Spanish compositions, in particular, had an impact on French Romantics such as George Sand and Victor Hugo, and ultimately influenced the music of Bizet's Carmen. As a singing teacher, Garcia was beyond comparison. Foremost among his many successful pupils were the tenor, Adolphe Nouritt, and his three children, Maria Malibran, Pauline Viardot- Garcia, and Manuel Patricio Garcia. James Radomski gathers, for the first time, all pertinent information surrounding Garcia and sets vividly the operatic scene of the period. The musicians life is chronicled from his earliest years in Seville until his death in Paris in 1832. With substantial reference to previously undiscovered reviews and letters, this biography also includes discussions of Garcia's compositions and teaching through musical examples and illustrations.

James Radomsik's new biography brings vividly to life the theatre world of Madrid, Paris and London in the early years of the 19th Century ... the intricacies and intriques of Spanish cultural politics ... make for fascinating reading, as Radomski supplies page after page of unpublished documents