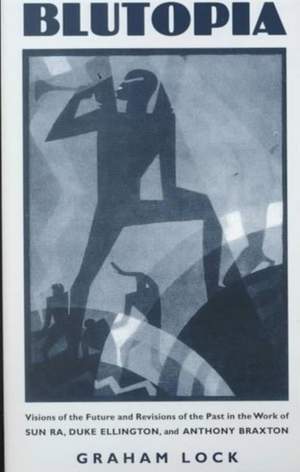 Blutopia: Visions of the Future and Revisions of the Past in the Work of Sun Ra, Duke Ellington, and Anthony Braxton

[Lock's] book offers a very fertile line of thought, and he must be right that it could be applied to other African American music from Scott Joplin to Cecil Taylor. There's copious annotation... — Jazz Review More…

In Blutopia Graham Lock studies the music and thought of three pioneering twentieth-century musicians: Sun Ra, Duke Ellington, and Anthony Braxton. Providing an alternative to previous analyses of their work, Lock shows how these distinctive artists were each influenced by a common musical and spiritual heritage and participated in self-conscious efforts to create a utopian vision of the future.
A century after Ellington's birth, Lock reassesses his use of music as a form of black history and compares the different approaches of Ra, a band leader who focused on the future and cosmology, and Braxton, a contemporary composer whose work creates its own elaborate mythology. Arguing that the majority of writing on black music and musicians has-even if inadvertently-incorporated racial stereotypes, he explains how each artist reacted to criticism and sought to break free of categorical confines. Drawing on social history, musicology, biography, cultural theory, and, most of all, statements by the musicians themselves, Lock writes of their influential work.
Blutopia will be a welcome contribution to the literature on twentieth-century African American music and creativity. It will interest students of jazz, American music, African American studies, American culture, and cultural studies.

[Lock's] book offers a very fertile line of thought, and he must be right that it could be applied to other African American music from Scott Joplin to Cecil Taylor. There's copious annotation but while the scholarship is formidable, the presentation is clear and readable. Blutopia is an important and novel addition to the jazz literature." -- Andy Hamilton