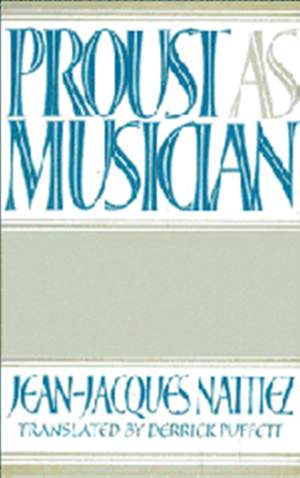 Does one need to know the rules of harmony to be considered a musician? Throughout A la recherche du temps perdu, and particularly ' Swann in Love', Proust displays a surprising sensitivity to the way music is heard, a sensitivity to which we owe some of the most beautiful writing on music. Through a study of the texts devoted to the Sonata and Septet of Vinteui, Jean-Jacques Nattiez demonstrates the fundamental role played by music in the evolution of the novel. He also shows how Debussy, Wagner and Beethoven provide the basis for a mystical quest whose goal is pure music and the literary absolute. Music as model for literature: this is the subject of Professor Nattiez's essay, which unravels the various musical themes running through Proust's work, and which thus constitutes a particularly clear and perceptive introduction to his writing.