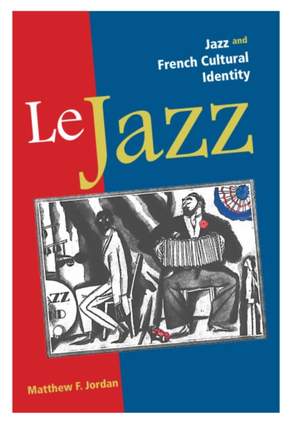 [A] fascinating book — All About Jazz

In Le Jazz, Matthew F. Jordan deftly blends textual analysis, critical theory, and cultural history in a wide-ranging and highly readable account of how jazz progressed from a foreign cultural innovation met with resistance by French traditionalists to a naturalized component of the country's identity. Jordan draws on sources including ephemeral critical writing in the press and twentieth-century French literature to trace the country's reception of jazz, from the Cakewalk dance craze and the music's significance as a harbinger of cultural recovery after World War II to its place within French ethnography and cultural hybridity.

Countering the histories of jazz's celebratory reception in France, Jordan delves in to the reluctance of many French citizens to accept jazz with the same enthusiasm as the liberal humanists and cosmopolitan crowds of the 1930s. Jordan argues that some listeners and critics perceived jazz as a threat to traditional French culture, and only as France modernized its identity did jazz become compatible with notions of Frenchness. Le Jazz speaks to the power of enlivened debate about popular culture, art, and expression as the means for constructing a vibrant cultural identity, revealing crucial keys to understanding how the French have come to see themselves in the postwar world.