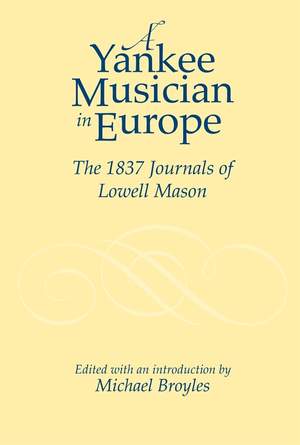 A Yankee Musician in Europe: The 1837 Journals of Lowell Mason

Edited version of the 1837 journal of American musician Lowell Mason written while traveling through Europe. By the middle of the nineteenth century Lowell Mason (1792-1872) was probably the most famous native-born musician in America. Concentrating almost exclusively on vocal music, he built a spectacular reputation as a choir directorand teacher. He published many collections of sacred music that sold in unprecedented numbers and made him a household name. In 1837 he traveled to Europe on a little-publicized trip. This was a bold move decades before such trips by American musicians became commonplace, and his diaries from this time are a primary source of information on early nineteenth-century European music. This edition of Mason's 1837 journal has been carefully edited: throughout, Broyles has attempted to reproduce the original manuscript faithfully, making adjustments only where necessary for intelligibility. Appendices include a list names with brief biographies, an itinerary of the tour, and those letters received during the trip that still survive. An introduction completes this unique and highly readable volume. Michael Broyles is Distinguished Professor of Music and Professor of American History Emeritus at PennState University and Visiting Professor at Florida State University.