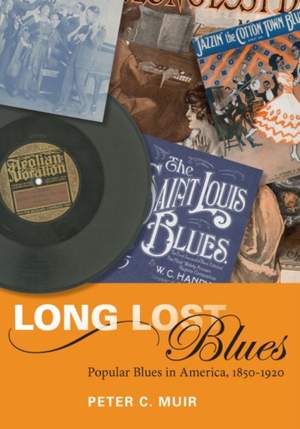 Required reading for lovers of the blues and historians of American popular music — Notes: Journal of the Music Library Association

Mamie Smith's 1920 recording of "Crazy Blues" is commonly thought to signify the beginning of commercial attention to blues music and culture, but by that year more than 450 other blues titles had already appeared in sheet music and on recordings. In this examination of early popular blues, Peter C. Muir traces the genre's early history and the highly creative interplay between folk and popular forms, focusing especially on the roles W. C. Handy played in both blues music and the music business.

Long Lost Blues exposes for the first time the full scope and importance of early popular blues to mainstream American culture in the early twentieth century. Closely analyzing sheet music and other print sources that have previously gone unexamined, Muir revises our understanding of the evolution and sociology of blues at its inception.

An internationally recognized pianist, composer, scholar, and conductor, Peter C. Muir is the cofounder and codirector of the Institute for Music and Health in Verbank, New York.