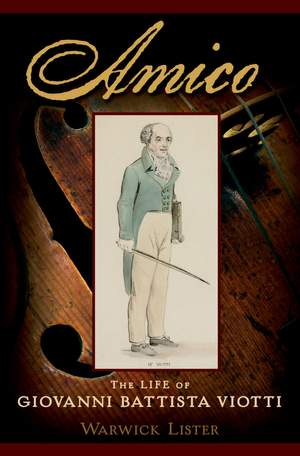 If it is a somewhat pale title for a book, it must also be admitted that Viotti himself was sometimes pale as a man. Thanks for Warwick Lister's painstaking work, however, much colour has been... — The Times More…

Giovanni Battista Viotti was unquestionably the most influential violinist of his time, and his style continues to pervade to the present day. The last great representative of the Italian tradition that Corelli began, Viotti is often considered the founder of the modern or 19th-century French school of violin playing. In Amico: The Life of Giovanni Battista Viotti, author Warwick Lister provides the first complete biography in English of this continuously significant violinist. Much of the documentary material Lister cites is previously unknown or not translated. Lister's biography takes the reader on a fascinating journey over the European continent and into the musical culture of the late 18th century. Born one year prior to Mozart and dying three years before Beethoven's death, Viotti rose from the humble origins of a blacksmith's son in a village near Turin, Italy, to international fame. His multifarious career as a concert performer, composer, teacher, opera theater director, and impresario was played out against the backdrop of a dramatically changing world - he served as a court musician for no less a figure than Marie Antoinette before founding an opera house in Paris. Viotti also knew tragedy as well as success: he was forced to flee the French Revolution, he was exiled from England for an extended period based on suspicions of certain Jacobin tendencies, his attempt to establish himself in business met with failure, and he died heavily in debt. Lister concludes Amico by coming to grips with the very things that account for Viotti's greatness and influence: the technical aspects of his violin playing and compositions. With its extensive documentary research and the inclusion of translations of various archival documents, this is the essential English-language biography of Viotti, a significant addition to the libraries of students and scholars of 18th and early 19th century music, as well as violin performers, students, and instructors.

If it is a somewhat pale title for a book, it must also be admitted that Viotti himself was sometimes pale as a man. Thanks for Warwick Lister's painstaking work, however, much colour has been restored to his portrait. Amico inspires hope that performers will go and explore Viotti's music and complete the picture