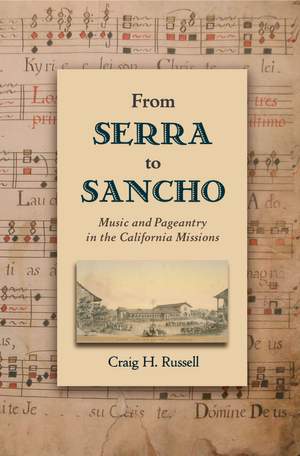 From Serra to Sancho: Music and Pageantry in the California Missions

Music in the California missions was a pluralistic combination of voices and instruments, of liturgy and spectacle, of styles and functions-and even of cultures-in a new blend that was non-existent before the Franciscan friars made their way to California beginning in 1769. This book explores the exquisite sacred music that flourished on the West Coast of America when it was under Spanish and Mexican rule; it delves into the historical, cultural, biographical, and stylistic aspects of California mission music during the late eighteenth and early nineteenth centuries. The book explores how mellifluous plainchant, reverent hymns, spunky folkloric ditties, "classical" music in the style of Haydn, and even Native American drumming were interwoven into a tapestry of resonant beauty. Aspects of music terminology, performance practice, notation, theory, sacred song, hymns, the sequence, the mass, and pageantry are addressed. Russell draws upon hundreds of primary documents in California, Mexico, Madrid, Barcelona, London, and Mallorca, and it is through the melding together of this information from geographically separated places that he brings the mystery of California's mission music into sharper focus. In addition to extensive musical analysis, the book also examines such things as cultural context, style, scribal attribution, instructions to musicians, government questionnaires, invoices, the liturgy, architectural space where performances took place, spectacle, musical instruments, instrument construction, shipping records, travelers' accounts, letters, diaries, passenger lists, baptismal and burial records, and other primary source material. Within this book one finds considerable biographical information about Junipero Serra, Juan Bautista Sancho, Narciso Duran, Florencio Ibanez, Pedro Cabot, Martin de Cruzelaegui, Ignacio de Jerusalem, and Francisco Javier Garcia Fajer. Furthermore, it contains five far-reaching appendices: a Catalogue of Mission Sources; Photos of Missions and Mission Manuscripts (with over 150 color facsimiles); Translations of Primary Texts; Music Editions (that are performance-ready); and an extensive Bibliography.