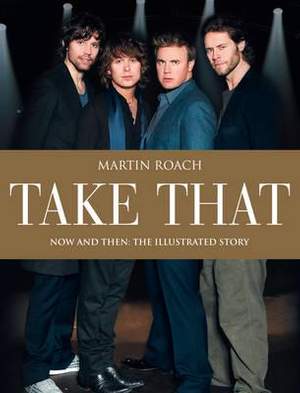 Take That: Now and Then

Take That have acheived the biggest comeback in British pop history...and it seems they are only just beginning.

In November 2008, Take That announced a summer tour for 2009 - yet even by their own remarkable standards, the frenzy for tickets was almost hysterical. Within three hours, all 700,000 tickets had been sold, forcing stadiums across Britain to be re-booked for extra dates. This was nothing new - the reformed 'man band' had already broken British records for DVD sales, single sales and released the fastest selling album of 2008 with Circus. They are re-writing all the record books...literally.

How have they done it? Why does Britain adore Take That?

Take That - Now and Then explores this phenomenon while this new, fully updated edition is also a vast visual bible for all Take That fans. From the band's first 'comeback album', Beautiful World, Take That's story is brought right up to the present day with full coverage of new singles, new albums, TV appearances, Ivor Novello and Brit Awards, growing families and spectacular stadium gigs. Further, the book will be hugely expanded with scores of colour and black and white photos, as well as rare and unseen memorabilia, ticket stubs, backstage passes, snap shots and studio snippets - taking fans from the early 90s and Robbie all the way to Take That's current 'man band' status .

Take That are the UK's biggest pop band - Now and Then: The Illustrated Story will be a must-have book for their millions of fans.