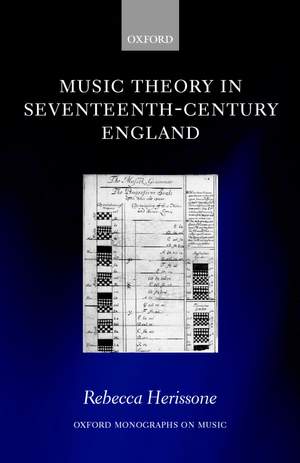 A full and invaluable account of English theoretical writing over the period ... A particularly valuable contribution of the book to English music history is the four full appendices — Musical Times

The fundamental changes that resulted in the development of the Baroque style around the turn of the seventeenth century also had a profound effect on music theory. As musicians began to adopt new approaches to composition, authors gradually became aware that the theories on which they relied, some of which dated back to medieval times, were largely obsolete. Thus, over the course of the seventeenth century, there occurred a complete transformation in almost every aspect of theory: by the 1720s, many of the principles being described bore close relation to those still used today. Nowhere was this metamorphosis clearer than in England where, because of a traditional emphasis on practicality, there was much more willingness to accept and encourage new theoretical ideas than on the continent. By tracing the progress of both rudimentary and more advanced compositional theories in English treatises, Dr Herissone provides a detailed and comprehensive commentary on musical developments during the period.

A full and invaluable account of English theoretical writing over the period ... A particularly valuable contribution of the book to English music history is the four full appendices