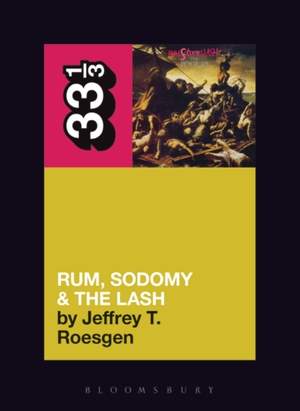 The Pogues' Rum, Sodomy and the Lash

This album is the prime example of The Pogue's uncanny ability to evoke the lives of the drunken, downtrodden and abused.To absorb Rum, Sodomy, and the Lash is to be taken on a wild voyage with a cast of downtrodden revolutionaries. Despite this notion, the epic themes of the Pogues' second full length record have been overlooked by both critics and biographers in favor of two things: the band's penchant for combining Celtic folk with punk and the excesses of Shane MacGowan. Instead of reiterating these aspects, this book discusses, in the form of a sea-faring narrative, the record's articulation of what it is to be magnificently downtrodden. Through epic imagery gracing the cover of the album and reverberating throughout the lyrics, Roesgen's book shows that what the Pogues created is far more than pub-room music created by drunken men wallowing in Irish nostalgia and reveals a pining for something subversive."33 1/3" is a series of short books about a wide variety of albums, by artists ranging from James Brown to the Beastie Boys. Launched in September 2003, the series now contains over 50 titles and is acclaimed and loved by fans, musicians and scholars alike.